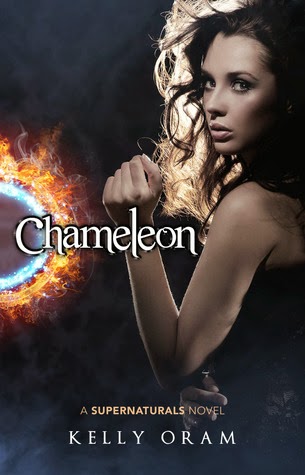 Today starts my first book review:) Reading the beginnings of the Supernaturals series has so far been fantastic fantasy novel with a perfect dash of romance. Chameleon, the first book of the series, is a well written novel that makes you want to keep on reading and not stop until it is over. Dani finds out that she is more than just human. More than just any other supernatural. And instead of being almost invisible at school, she has two boys falling for her: her best friend and a boy who is destined to be with her. Kelly Oram has a way of writing that makes you see and feel the indecision in Dani's mind. The love. The hurt. The loss. The anger. You can picture what's happening in the book like you're watching a movie. Chameleon has a great storyline and a perfect group of characteristics in every person Kelly writes. If you haven't read this book, I highly suggest it to anyone that loves a great fantasy novel:)
SPOILERS:
Please do not continue reading until you have read the book:)
Dani is a strong girl for someone that has lived her whole life thinking she was normal. Learning that she isn't human and that the whole supernatural race wants her either dead or alive is life changing... literally. Choosing between her best friend and a guy she just meet but it supposed to be her true love is one tough decision, too. Dani must find a way to be what she was destined to be and find out who she can't live without. The things Dani goes through, all the lies and new discoveries she uncovers, is a huge weight to put on someone. Having to deal with all the betrayal and having to be strong at the same time is really hard and I admire her for being able to pull it off. I understand her hesitant feelings towards the council after everything that they have done to her. It might have been meant to serve a greater purpose, but severing her bond with Russ was such a cruel thing to do.
I honestly love Russ, but I am Team Gabriel one hundred percent. Russ is such an arrogant smart- aleck but so lovable, kind of like Jace Wayland but not as intense;) I feel bad for him because his connection with Dani gets severed and he can't love anyone else besides her. On top of that, his father has lied to him his whole life, but I feel like he doesn't have to take everything out on Dani. I get that he wants and needs Dani but you shouldn't hurt someone you love. When he doesn't get his way, he flips out. And that's a lot.
Gabriel is a really put together guy that makes you automatically respect him and want his respect. I think it's endearing how Gabriel talks so formally and how he doesn't know anything about the internet or dating. He is very straight forward with what he thinks. He's handsome yet so very gentle. How much he loves Dani is astonishing. Whenever he looks so surprised when Dani defends him, I always smile because I think it's funny how clueless he can be about how Dani feels about him. Reading about Gabriel made me fall in love with him right when Dani walked in the room and found him sitting in a corner.
The three of them have to work together to stop Russ' dad, Alex, from waking up the demon of Death. It takes a lot for the boys to work together but they somehow find a way. The resistance and the council are all looking for Dani and the boys and they have no idea who is in the visions that Dani is having. Finding out that Alex was behind the hood was a total plot twist to me. I didn't know who it was but I never thought that it would be Alex.
Everything happens so fast and yet you suck the story up like a sponge. The story takes a new and original twist on fantasy using cool abilities for the vampires, werewolves, fey, and the witches and warlocks. I cannot wait for the next few books to come out, Kelly! I'm sure that all of them will be just as great as this one:)
Labels: Chameleon First Review Kelly Oram Powers Review Series Supernatural YA Young Adult