Hello everyone! I am back with another book review! Chanda has been kind enough to send me a ebook of First :) And it's my lucky day because my school is closed due to unfortunate weather (it was literally only 2 inches of snow...). So here I am, typing up a review when I should be finishing some homework haha. If you want to buy the book on Amazon, click here.
Okay, can I just say, this cover has nothing to do with the book. Well, I guess it does if you want to think of the plant as a new beginning and a change in the world. But I personally like the second cover better. The cover for this book needs to be more like this one. 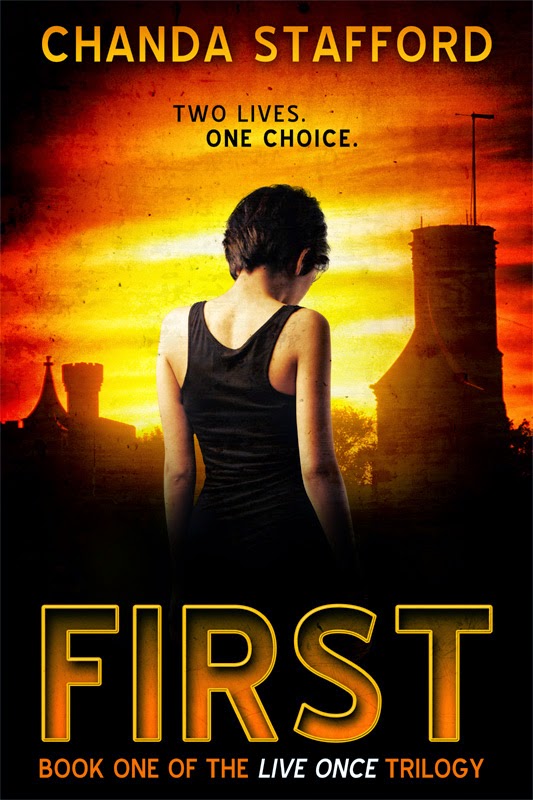 Anyway, wow. Just... wow. Okay I can honestly say that this book didn't grab my attention in the beginning. I was confused with who the 'First' was and the 'Second'. I felt like the story was going slow. But, as I kept reading, I put the pieces together and I understood! And then I met Will. Ahhh swoon-worthy Will. That is when the book got interesting.
What I really like about this book is that the to POV's that Chanda wrote were the different sides of society in a way. Sure, they both agreed on the same things, but Socrates is a higher ranking and has a million things to worry about while Mira only knows what she's been taught all her life. I like how the POV's weren't because they were interested in each other but it was merely because they are, in a way, connected. And I really like how Will and Mira didn't rush their relationship even if what they felt was instant.
The bravery in Mira, thinking about her sister and brother, was astounding. It was nice to read about a girl who doesn't want to die, to be on the brink of turning back, and at the last minute deciding to die. Not that it was nice, but in other books, the character is adamant about dying for the greater good like their life means nothing. Like they aren't afraid. But in reality, of course you're afraid to die. And Chanda did a nice job of showing that.
The servants and everyone else, okay, for those of you who haven't read this book, you may be a little confused. But if they know what's going to happen to her, why are they saying she's above them all? That just doesn't doesn't make sense! The people at the farm who know, spit on her, but would you like to be in her position? I didn't think so.
Just thinking about the concept of the book... just amazes me. First was very original and I have to admire the creativity of the story. Who would have thought to have people use civilians to live longer? And honestly, who would want to live longer? To see your family die, your friends, everyone around you. Well, I guess some obviously do. It's strange to see the Mira and Will and Socrates all think like the Lifers but they aren't one. I guess that just shows there are others ways to change the way the government does things than to bomb everyone.
I have a few minor critiques about this book (minor means like... really minor). One, I know that romance was far from the point of the story, but I wanted to read the story behind the girl in the cafeteria. What was her story? Another is that I didn't really know the concept of the First and Seconds. I know who they are and what they do, but it took me a while to put the pieces together and I think the story would have grabbed me more if I knew from the beginning.
Other than that, this book was amazing. It's scary to know what the future will hold for our children and their children and so on. What will to government do in the future? What will technology bring us, will it be for the better, or would it make life even worse? Worse for whom? All these questions are running through my mind right now.
I really hope that there will be a second book out, I want to know wha Mira and Max and Will and Dr. Scoffield will do! You all should definitely pick this book up and read it! 4.5 stars for me <3 GO GOGO pick this book up! It's worth the read (and Will will appreciate it ;))
Thank you again, Chanda! I really hope to read some more of your books (and the second one of First). Let me know if and when you are going to release them!
Labels: Chanda Stafford E-copy Fantasy First Live Once Requested Review Series