My Friend's Book in the Making... 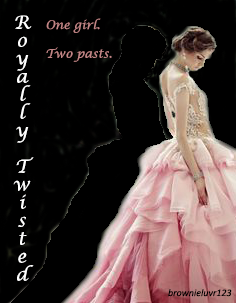 Hi everyone!:)
Has anyone had to shovel a boat load of snow today? I sure did... it was surely a great work out at least hahaha. This morning, I was stuck between photo editing and shoveling!
Photo editing what exactly? Why, I'm glad you asked (or maybe you didn't, but I will answer it anyway)! The above picture is a cover I literally just made for my friend's book that she is making on Wattpad (her username is on the bottom right corner). She hasn't written anything yet, but she wanted me to make a cover for her and give her input on the details of her story.
Now, the story... I can't really give any specifics, but I think I can give some generalities. Lia lives in modern-day England (think Jemima West with brown hair)... She's has the typical smart mouth and knows how to defend herself if needed. One day, she gets kidnapped and sent where?... not where. When. To the 17th century...To 1673. She is brought to a kingdom, where everyone thinks that she is the missing princess that has went away. No... she can't be. But that's not what the people are telling her. She has to learn about the royal ways: dresses and shoes (theres no way she's ever going to wear those things that looks like a disaster waiting to happen), fighting (now that, she can handle), princes, and least of all, politics. And out of nowhere, she is caught in a love triangle between the prince, Alexander, and the man who kidnapped her, Eric. Who will she choose? And does she really want to go back to her time anymore?
For the cover, I took a picture off google and colored the back black. The silhouette shows someone that helps her throughout the way, in ghost form;) It also shows her responsibilities of being a princess and her wanting to run away from it, not wanting them. But Lia wearing the dress shows that, at the same time, she kind of likes the new world she is cast into. She wants to help, but she also wants to go home.
I think that's all I can tell you before I give anything away! Hopefully my terrible summary intrigued you to read the book and that you like the not-too-crappy cover xP I'll post more details at my friend consent.
Well, I think that's all for today:) Hope the snow isn't too bad where you are! And if there isn't any where you live, well, you're lucky. Tell me what you think of anything!
Thank you for 800 views! You guys rock my world<3
Labels: Blog brownieluvr123 Fantasy Love Princess Royally Twisted Upcoming Author Wattpad