Michael Hanson and the Desolate Woods by E. L. Ervin

Hello everyone! Happy first day of June! Only sixteen more days until school ends :) Omg guys its like raining cats and dogs where I live right now. 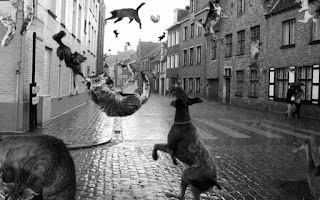 HAHA I don't know why I find that picture so funny xD Seriously though, it's raining super hard here, the umbrella on my deck is about to tip over. I have gym tomorrow, so hopefully I won't have to go out in the heat. Really hoping to just work out in the weight room. That'd be the best class ever.
Anyway, on to my review. I'm so sorry, E. L.! As I've said to Eric Andreas, I'm apologize for a late review! I have had major reading slumps and have been really busy doing school work. But I've read your book in about three days :) Which means I like it ;) And thank you for giving me an e-copy of this book! It means so much to me :D
I really liked the story. How Michael came to his powers and how loyal the people around him were, it was awesome. It was refreshing to me to read a book where the protagonist isn't second guessing his friends. The loyalty that Michael had with his friends (what, like seven of them now?) is really rare to find. Especially having that respect with so many of them. I honestly have only one true friend at school (key word: school. I love you all too <3 ). Everyone else are friends but not someone I can talk to about everything.
I also liked the adventure. Everything was surprisingly fast-paced. There wasn't any waiting and standing around. It was to the point. Do it or don't. Which I loved! In most adventure books, I tend to yell at the book like "Come on. There no time to argue! Just do it!" and it would take like fifty pages until something actually happened (a little exaggerated there, but you know what I mean).
Another thing, they actually got somewhere in this book! There are some books where a lot of stuff happens but, in the end, they're still at square one. But this book got to like square five hundred!

Haha. They found out so much and they all when through so much in just thirty short days.
Although I enjoyed reading this book, there were a few minor things that kind of turned me off when reading. When I first read this book, there were a lot of unnecessary exclamation marks. Or what I felt like they were. When I saw one, I just kept thinking, "It wasn't that exciting". It made reading not worth the exclamation marks.
Another thing was that I didn't feel like E. L. went through a lot of detail in the story. Well, I guess she did... I wouldn't know how to say it, but I felt like everything was so rushed. I definitely liked the fastness of the story. Like the scene in the woods? That was so fast, nothing really happened, action-wise. And the scene in the dungeon with Celeste, Chaz, Chase, and everyone else? When they're all fighting? I felt like that was really brief. I wanted to have more fighting, more injuries, more conflict.
That's actually another thing. I felt like Michael trusted so easily in the beginning. It's a good thing that they were actually good people. But realistically, if I went to a new world with two strangers, I would not be trusting so much, even if they did know about my parents. I'm glad that he wasn't too trusting with Chase or Adonis so easily.
All of those are minor things that I didn't like. Other than that, I really enjoyed reading about Michael and how be came to be all powerful :) To be honest, the cover doesn't do it justice. I thought it was going to be a cheesy book, but I was glad to be wrong :)
I give this book 3.5 stars out of 5 :D I really hope to hear from E. L. Ervin to see when the release of the next book is! I really hope I like the sequel better. I cannot wait to read more of Michael and his adventures.
Labels: E-copy E. L. Ervin Fantasy Powers Requested Review Series The Powers of Ezron