Double post?! You betcha ;) I want to get all my reviews in so I can start to review other authors again :) I haven't been accepting a lot and when I do, I mention that it might take a while. But I want to start again and promote this blog so one day, I can start doing giveaways and cool stuff for you guys <3
I totally like this cover better, even though I don't see how it relates to the book xD 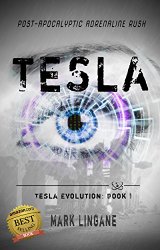 Anyway, this book is good. I want to put that out there before I start my review so you guys don't forget that. I liked Mark's idea about video games and technology. I really like his writing style and the flowiness of it (yes, I'm aware that flowiness isn't a word, but let's make it one today). I actually think a lot of you will like it- apparently, a lot of you did since theres that huge one on the top right corner of the over- but this book wasn't for me. If you want to get this book on Amazon, click here.
Though I like the idea, I didn't think that the whole 'video game' thing fit right with the story. It would've been just as great without it, and maybe more. It felt off to me. This world is in the age of technology and video games and stuff, but I don't think it needs to be portrayed in a book. Maybe it can, but with the write story line. Also, with the usernames? That just felt so pointless to me. Why did that need to be put in there? Nothing good or bad came out of it. It was just... there.
Another thing are the characters. Gosh, they were so annoying. When I met Sebastian, I liked him. Cool kid, had guts. Basically a twelve year-old with the manners and thoughts of a sixteen year-old. But as the story progressed, he became whinny and complained so much. I get how he's only twelve. I know, but I think that he should've been older. Like Percy Jackson, he was only in middle school when he first started! Both Percy and Sebastian much too young to have that sort of weight put on them. He was brave at times and such a kid at others. When he complained about Gavin, I get how someone would be annoyed at that, but you don't need to disrespect a teacher in the middle of class because of it. And it didn't get him anywhere anyway. And what was with the 'when I become king'? 'when' not 'if'? When did he become such an arrogant little boy?
Melanie. I had so much respect for her. She was dying but lived in a cave and hunted for food. She wasn't happy but she was surviving. Yeah, she was depressed and mean and said too many curse words, but that was her being tough and hiding her feelings. When she met Gavin? Man, she turned right into a girly-girl who loved shoes and shopping and dresses. Such a quick change. And she swooned over him and hung over his shoulder every second. She forgot about Sebastian. During the final battle, she didn't even ask if he was hurt, she asked if he was 'too scared' and then went right to describing about amazing Gavin is when Seb is obviously the more advanced Tesla. I don't think this is a real issue in the book. I normally go for the independent girls who don't let other guys be what their life is revolved around. I think this just my preference on the type of characters.
What was the point of the witch in that house when they group was trying to rescue Seb's mother? She said some stuff- that I will not spoil- but her thing had no truth to them. I felt that that was also a useless part of the book. Was she trying to check her loyalty? And if so, why?
Another thing is that, I really liked how Mark used science into how everything works. That must've taken a lot of research if you didn't know about that stuff before. But I always started getting confused with the concepts once he started using jargon I didn't understand. I also got confused with what was happening in the book when there was a fight happening? I think there were just a lot of things going on at once that I couldn't really picture what was happening and I ended up having to reread the scene a couple of times.
What I do really really love about this book is the major battle. Or the mini battles that, put together, was the major battle. I liked how it wasn't this one big thing, but little ones. Because in real like, there isn't always this huge battle that happens and everything just settles. It takes a lot of mini battles to end everything out. I didn't get confused at all during the end and I really liked that.
Overall, this book wasn't the best, but it definitely wasn't the worst. I can see this huge potential in this book. And there is a lot of skill there, but it just wasn't a book for me. All of my critique is basically a preference opinion other than facts. Mark's writing and story line was top-notch. If he wrote a different, action-packed story, I would definitely give it a read. I hope you guys liked this review, sorry for all the critique, but you should definitely give this book a shot if you like the technology/action/cyborg kinds of books :)
Labels: Dystopian E-copy Game Mark Lingane Powers Requested Review Sci-Fi Science Fiction Tesla