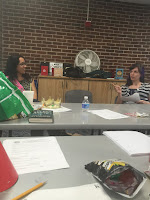 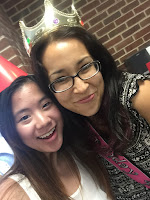 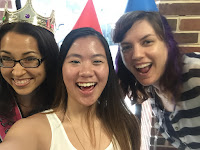 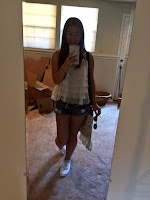 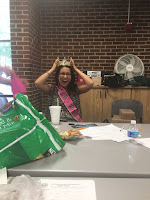 Hello everyone! Okay, I should really be studying, but I just had to write this experience! And it won't take too long ;)
This event was so much more than what I expected! When I got to the library, I think I was about forty minutes early xD I actually wanted to check out the library since the only public library I've been to is mine. Looking around, they actually have a really nice area. It was nice and quiet and the little place for kids was so adorable. Stuffed animals and children's books were scattered. This one dad was reading to his daughter on a rocking chair, both of them laughing. It was the most adorable scene. I wanted to take a picture, since I do photo edits, but then the dad glanced up at me and I thought better not haha.
So while I was stalking people around the library, trying to see if they were part of the writing workshop too, I'm on Twitter talking to one of my closest Twitter friends. Cat lives in Charlottesville and said she'd be coming too, we were desperately trying to meet xD Anyway, we kept talking and asking where we were when she finally walks over to me!!! I was really excited to finally meet someone I talk to on Twitter and what do you know, she's where a Harry Potter dress <3 Even better. 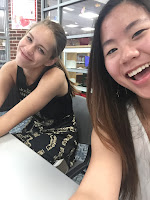 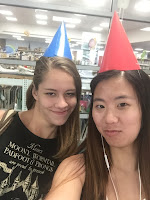 After we got through introductions, it was kind of awkward, honestly. We didn't really know what to say and were both just walking around looking at books. But once we sat down in the room, waiting for Kristen Simmons and Sara Raasch to come, it was a whole lot better.
So yes, we walked into the room and met three other people, Kieran, Will, and Reagan. They were all in middle school, all pretty shy except for Will. Once Kristen and Sarah came, oh my gawd, it was awesome.
I actually didn't know, but it was Kristen Simmons' birthday that day. I was actually really happy to spend a few hours of her birthday with her (hopefully she enjoyed it as much as Cat and I did). They passed around candy, snacks, and party hats (as you can see in the pictures ;) ) and we all pounced on those.
The whole event was talking about the importance or character and world development in order to have a good story (I remember the props, Kristen!) and without them, your story will crash down. So the first half was the seven of us making up a story together using the formats that they use when writing and putting it all together. Our kick-ass story was about the Ducktator and his evil scheme to take all the Duck tape away from Ducktopia and replace it all with Staples. So it was really a war between Duck tape and Staples. The whole time, everyone was laughing and putting hilarious ideas out there for us to use. We have the ideas, now someone just needs to write it ;)
The other half was us using the same format and putting our own stories in there. Apparently, every had a story they were working on, which was really cool. So of course, I did the protagonist of Dream Catcher, Jen Cohen. When I volunteered to present what I had so far, I was really nervous, as was everyone. It might just be a story to people, but even if it had aliens and robots, it's still personal to you. My story has some characteristics of people I know and just having two amazing authors hearing what I have, it's nerve-wracking. Very exciting, but nerve-wracking. While I was talking about my story, I realized how sad mine was. Mom and grandma dies, brother is taking care of me. My former babysitter is the one I lean on so I don't worry my brother. I have dreams that I can't yet control and I dreamed my mother's death. Yeah... very sad. Realizing this while I was talking, I started to get more and more quiet, because who wants to hear a sad story while we were just laughing about Duck tape?
But Kristen and Sara LIKE IT! They said it was really coming off to a good start and how it's cool how I incorporated dream catchers in it and that it was cool how serious family is in the book. And they said my title was really catchy! YAS! Inside I was totally doing my crazy happy dance, jumping up and down. I told them I didn't know how to fit the antagonist in, and they started talking amongst each other about how the guy should know about the dreams and he can help her, but he needs something too, so it's a battle between how much she needs him. I actually haven't ever thought about that. After they suggested that, the whole book just came together in my mind. I could just picture everything going down. So thank you so much Kristen and Sara! You've helped me more than you know!
The two other people's stories were surprisingly awesome, too. Kieran had an astronomy twist to his story. About how the protagonist reads the stars and starts warning people about an apocalypse. Reagan had a story about a girl's mother who is evil and tries to destroy the girl. She said it with so much enthusiasm, it just sounded really cool xD If they ever put their book out there, I'd totally read it and I can now say that I met them before so that makes me cool ;) hahaha.
I also asked some questions I normally ask authors, to get different views on things. Like writers block, how hard it was to get your book out there, etc. They gave me some really great feedback and I now take all of them to heart <3
The whole thing was awesome. I was really happy to see them for a second time, since the first time, it was a book signing and I was too excited about seeing them that I really didn't know what to say. haha


Anyway,  I had a really fantastic time. The people that follow me on Twitter are probably tired of me talking about it, but it's one experience I'd never forget. Now, if Sara or Kristen ever write the Ducktator story, my life would be made ;D
Alright guys, I have to go back to studying now xD I'll see you all later with a review :)
Labels: Duckist Ducktator Kristen Simmons Sarah Rassch Stapleism Teen Writing Workshop Twitter Friend Writing Writing Workshop