If I Stay Movie 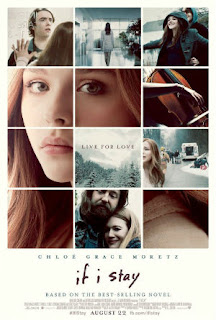 I'm back! So I had my school orientation yesterday. Basically, what we do there is to go in, get our schedules, meet our teachers, and hang out at a cook-out kinda thing. Well, it was raining yesterday, so it was indoors... Anyway, I met my teachers. Most of them seem pretty decent for their first impression. I really like my history and AP Psych teachers; they seem really cool. My guy friend wasn't in any of my classes :/ Which sucks because we just started talking this summer. My best friend was out of state and couldn't make it so I don't know if I have classes with her. Hopefully we do because we never have any classes. Literally. The world hates us.
Anyway, on to this review. I watched this last night and my eyes are still puffy from crying... *sigh*.
I did read the book a while ago... probably in January or something. It's been a while so I don't remember enough to nitpick at everything they changed. I do know that they changed some stuff, though. But whatever that they changed that I could see, didn't take away from the whole plot, which is really good. I read this book and it didn't really grab me as much as others. I guess all the hype made me put If I Stay on a high pedestal and it didn't reach my expectations. I don't know, I just didn't really feel the emotion in the book.
But this movie really made me cry from, like, halfway through. I felt her pain and everyone else's more through this movie than in the book. I understood more how she felt in each scene. Don't get me wrong, Gayle Foreman's writing was awesome. I just couldn't connect with it for some reason.
The transitions of this movie was awesome. You understood when it was transitioning so it wasn't so confusing. And every time it switched, I'd forget about the other scene entirely, always enraptured by what was currently showing on the screen. In books, when there's different POV's or change in time, sometimes you'd want to skip through one person's POV or skim through whatever time period it changed to because you like a certain story line better. But this movie made me love both equally.
What I do want to say, though, the format of the movie was a lot like The Fault In Our Stars movie. I think If I Stay was released after TFIOS, but if I'm wrong, well I saw TFIOS first, so that's the order I'm going in. Like Mia talking as a narrator felt the same as Hazel Grace talking. Though, Mia talked more, it still felt the same. And both of the love interests in the book had the same personality and charisma. I felt like it was a John Green adaptation, when obviously it's a Gayle Forman adaptation.
I felt the similarity of them more than when I read the book. When I read If I Stay, I didn't notice it. Maybe it's just me, or the cast just happened to be alike. I don't know, but it felt kind of weird.
I still hated the ending, though. Like, really? Ugh. The book ended it very abruptly and left me annoyed. The movie ended it both abruptly, and like they didn't try as hard with the editing or whatever they need to do to transition it in. Her eyes opened too fast and felt so fake, I didn't feel any relief in her waking up, but annoyance because it didn't look at all realistic.
The rest of the movie before that scene was really good, since my eyes are still puffy haha. Good job to the directors, producers, script-writers, actors, and everyone who took part in the movie!
A lot of book lovers would say that the book is always better than the movie, but honestly, not when you didn't particularly like the book. So in this case, yes, I liked the movie better. So good job movie people! You guys did a good job being able to cut out some scenes or change things around, while still keeping it loyal to the book.
Labels: Contemporary If I Stay Movie