Good evening, everyone!
So I'm currently supposed to be studying and doing homework. Unfortunately for me, my brain is seconds away from blowing up. I knew Junior year of high school would be tough since I have Pre-Calc, Chemistry, AP Psychology, and SAT studying, but I didn't know I'd be cramming so much time together.
Anyway, right now I need time to just relax and not think about school. So this post is like my little break from everything. Thank goodness! Haha.
Since I'm cramming all my time for school, I barely have enough time to focus on all of this awesome book and author updates! Which, let me tell you, is extremely irritating. So since I haven't been on, I've only seen two major updates I've seen. Or at least major to me. Haha. I know a lot of you have most likely heard this news, but for any of you who haven't, have a seat and get ready for the awesomeness I'm about to spill!
The first one is, the Throne of Glass series by Sarah J Maas is FINALLY optioned for film! I'm so flipping excited. ToG is one of my many favorite series. Sarah's writing is not only fluid and artistic, but every word is meticulously and strategically placed. Her books have been around for what feels like forever. I don't even know how I'm going to deal with the series ending. Anyway, it's optioned for film, which I'm extremely happy about. I feel that TV shows have a better shot at doing the books justice because they receive more time and space to create detail and build chemistry between characters.
Right now, it's only optioned for film, but they already have a dream cast up! Click here to view. I personally love it! I mean, I didn't really see Cara as Celaena. But in all honesty, I only saw the girl on the cover of the books as her... and she's not even real... Other than that, It's super exciting! I hope that if they do officially make it into a show, it does the book justice. That's hard to put of producers and directors since the books are AMAZING, but hopefully they find a way. ;)
The second part of the news is that the cover of Oblivion by Jennifer L Armentrout has been released today! 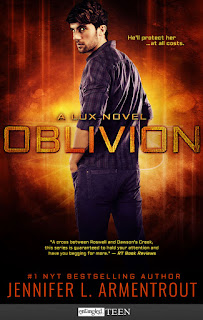 Jennifer L Armentrout is one of my all-time favorite authors. It's actually the Lux series that really got me into science-fiction and aliens. Because we all know we want a Daemon Black in our lives. ;) Actually, the Lux series has been optioned for film and Jennifer's Covenant series (fantasy based on Greek Mythology that's also super awesome) has been optioned for a TV show, too!
But anyway, I absolutely love this cover. Though it doesn't match the whole series theme, it really show's Daemon's badass-ness, since this is from his POV.
I have missed this series deeply. It ended (a perfect ending), but Jennifer has added some scenes on her Wattpad, which I'm so thankful for. So to have this cover release practically slapped me in the face saying, "DUDE THE SERIES IS SORTA COMING BACK."And that just makes my day.
Alright, that's all for today! I can't wait to share more about ToG and post my QoS review soon! And I CANNOT wait for Oblivion to release!!!! DAEMON AND KATY ARE THE CUTEST! Omg, my name's Caitlin and people often use Katie as a nickname which can also be spelled as Katy... which means... DAEMON AND I ARE TOGETHER OMG.
Haha with that happy realization in my head, I think I'm strong enough to go back to homework! Goodnight everyone! <3
Labels: Blog Book Cover Jennifer L Armentrout Lux News Oblivion Sarah J Maas Throne of Glass TV Show