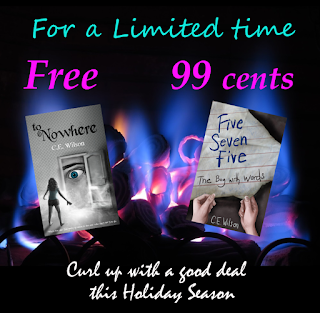 This evening I'm doing a book promo for a friend of mine, C.E. Wilson. I've recently reviewed her book Five Seven Five: The Boy With Words and I absolutely LOVED it! She is currently writing the second book in the series called To Nowhere and I'm SOOO excited to get my hands on it! I can tell you that the cover is definitely way better than the first book's cover :D
C.E. has asked me to help promote her two books and I gladly took the chance to spread the word about this amazing series. So without further ado, here are FIVE teasers from Five Seven Five!!!

That's all of them! Intriguing right? ;) Trust me, it's super worth it! If you want to check out my review of Five Seven Five, you can check it out here.
Don't forget, To Nowhere and Five Seven Five is on sale right now for a limited time! Be sure to pick it up while the price is still low!!!